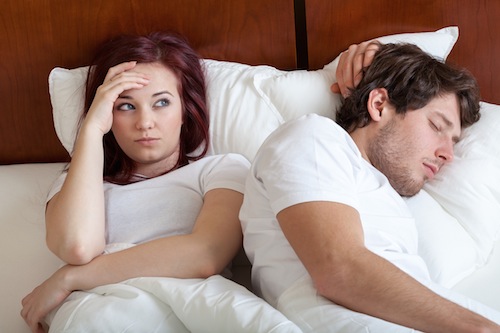 Getting a good night’s sleep is a critical to your overall health, but for between 50 and 70 million Americans who suffer from sleep disorders, a restful night’s sleep is rarely enjoyed (Institute of Medicine, 2006). An estimated 60% of Americans suffer from some form of sleep disruption nearly every night (National Sleep Foundation, 2011), but there are treatments available.

If you think you are suffering from a sleep disorder, the first step is to work with your doctor to first diagnose the problem and then decide on an appropriate treatment plan. There are many different sleep disorders but some of the most common are: sleep apnea, narcolepsy, periodic limb movements, bruxism, and stress related insomnia.

All of these conditions are associated with tiredness, increased napping, difficulty getting up in the morning, and generally reduced performance in daily life.

If you are one of the estimated 2–4% of the population suffering from sleep apnea (Alchanatis et al., 2012) you or those close to you may notice:

Untreated sleep apnea is associated with an increased risk of cardiovascular disease, heart failure (Leung & Bradley, 2001), it is important to visit your doctor if you notice any of the symptoms listed above. Your doctor may use a variety of techniques such as polysomnography, and physical examination in diagnosis and treatment can include a range of solutions from lifestyle changes to dental appliances or surgical intervention.

Narcolepsy is a chronic sleep disorder associated with neurological failure to regulate the sleep cycle. Narcolepsy is a relatively uncommon sleep disorder and can be very difficult to treat or diagnose. Sufferers may have to wait 10–15 years from their first symptoms to reach a diagnosis (NINDS, 2014), so if you notice any of the symptoms below you should speak to your doctor about your concern as soon as possible.

In addition to the characteristic sudden bouts of sleepiness, narcolepsy is also associated with: -frequent and excessive daytime sleepiness -sudden physical weakness accompanying emotions (cataplexy) -vivid hallucinations when falling asleep or when waking -automatic behaviour (talking and performing daily activities while asleep/unconscious) -inability to move or talk (sleep paralysis) after waking up

Though there is no cure for narcolepsy, there are some treatments which can help reduce symptoms. Lifestyle changes such as regular short naps, a regular sleep schedule, and avoiding alcohol and caffeine can help reduce chronic fatigue, as can drug treatments such as modafinil (NINDS, 2014). Cataplexy can be controlled by drug therapies such as tricylcics, serotonin reuptake inhibitors, and gamma hydoxybutyrate (NINDS, 2014).

Your doctor can help you choose the best combination of therapies to control symptoms, but it remains difficult to retain normal levels of alertness and activities such as distance driving are not recommended for suffers even those undergoing treatment.

Symptoms often include: - “Creepy” or “crawling” sensations in the legs and feet which are relieved by movement - Non-restful/restless sleep - Uncomfortable sensations during sleep - Increased activity - Cessation of symptoms in the early morning

With the help of your doctor, restless leg syndrome and periodic limb movements can be successfully managed in most cases with a combination of lifestyle changes and drug therapies. RLS is a life-long condition and there is no one best treatment but, through trials with various treatments, most sufferers can find relief (NINDS, 2014b).

An estimated 8% of the adult population suffers from sleep bruxism or tooth grinding (Lavigne et al., 2008). Bruxism negatively impacts your quality of sleep but can also lead to a range of dental complications. If your loved ones can hear grinding noises when you are sleeping, it may be time to visit a doctor or dentist to prevent further sleep disruption and tooth damage.

There is no cure for bruxism but there are a range of possible treatments. Behavioural modification therapies and relaxation techniques can help reduce bruxism as can some drug therapies, but the most effective method for reducing tooth damage, facial pain, and sleep disruption is the use of a custom dental night guard. Custom dental guards protect the teeth and provide jaw cushioning without obstructing breathing or affecting comfort. If you think that bruxism is causing your sleep disturbances, it is important that you see your dental professional, not only to improve your sleep but also to prevent irreversible dental damage.

The most common form of disordered sleep is stress related insomnia. Insomnia can be a symptom of a range of issues such as substance abuse, untreated medical conditions, behavioural factors, and psychiatric disorders, but for many Americans, insomnia is the result of worry.

Because insomnia can have a range of causes, there is no one cure. Behavioural therapies are often effective but it is still important to visit a medical professional to ensure that your insomnia is not a symptom of some deeper medical or psychiatric concern.

Improving the Quality of your Sleep

Even if you are not suffering from any particular sleep disorder, if your sleep is not as restful as you’d like there are ways to improve it. Avoiding alcohol, caffeine, and electronic media before bed in combination with establishing a regular sleep schedule can play an important role in improving the quality of your sleep.

Relaxation and meditation can also be helpful, but the most recent National Sleep Foundation Poll finds that the single best predictor of restful sleep is exercise. People who exercise regularly report more satisfying sleep and seem to require fewer hours of sleep to wake up rested (National Sleep Foundation, 2013). Regardless the current state of your sleeping habits, exercise can help you develop much healthier and more satisfying sleep patterns.