This ultra thin custom guard is ideal for day time teeth grinding and or clenching. It is made from a thin layer of hard acrylic (approximately 1mm thick).

It is thin, making it comfortable to wear and not very noticeable.  You can also speak comfortably while wearing this ultra thin day time mouth guard. It's generally not durable enough to hold up against night time grinding.

The ultra thin guard may be used for approximately 6 months to 2 years, depending on the degree of teeth grinding.

Upper or Lower Teeth Guard: Which One Should I Get?

The upper teeth guard is the default. The majority of customers (90% or more) choose the upper guard. Most customers find it more comfortable because it doesn't get in the way of their tongue as much as the lower guard.

You may choose a lower guard if you prefer the fit or if you've had some dental work performed (e.g. implants, crowns) and your dentist recommended that you use a lower guard.

Please note: If you're suffering from TMJ disorder or TMJ disorder symptoms, we do NOT recommend ordering a teeth guard online.  Please consult your dentist directly.  For more information, see this article about bruxism night guard vs TMJ mouth guard.

Bruxism doesn’t occur only during the night. In fact, over 10 percent of all night grinders suffer from daytime grinding as well. Daytime bruxism often goes unnoticed and can lead to pain, damaged teeth, or costly dental restorations.

According to a paper recently published in the Journal of the American Dental Association (June 2017 Volume 148, Issue 6, Pages 387–391) on the subject of awake bruxism, it was found that “Literature and clinical experience indicate a lack of patient awareness and, thus, underreporting of awake bruxism. As a result, myriad dental consequences can occur from bruxism.”

The Consequences of Daytime Bruxism

Daytime bruxism may cause:

As you can see, this is a serious condition that can lead to harmful consequences to your dental health. Although the causes behind teeth grinding and clenching are still not known, the leading assumption is that stress and anxiety are correlated with daytime bruxism. While it’s difficult to treat the root cause of the problem, obtaining a custom bite guard for daytime use is one of the easiest methods to prevent teeth damage. Day guards are thin, comfortable, and easy to wear, which makes them a practical solution for daytime teeth grinding and clenching.

According to Mauro Farella, a University of Otago professor of orthodontics, who has a long-standing research interest in bruxism:

“Most people are more concerned with sleep bruxism. It’s considered scarier and more harmful, and most dentists would say it is worse. However, I believe the opposite – that daytime bruxism can be more harmful.”

According to the professor, most people clench their teeth during the night for approximately 10 minutes, and in hard, short outbursts. However, daytime clenching is mostly lighter than nighttime clenching, but it can last for hours and thus cause more damage to the teeth.

However, the silver lining is that you don’t need a thick mouth guard for daytime bruxism. Since daytime grinding is often light, you can purchase an ultra thin mouth guard that is barely noticeable. The day guard is barely visible and it will pose minimal or no effect on your speech and communication with people during the day. Even though you may not be aware of your teeth grinding during the day, the ultra thin day guard will be protecting your teeth.

How to Choose the Best Daytime Mouth Guard

An effective mouth guard acts as a barrier between the teeth and absorbs the grinding and clenching forces. If you want to purchase the best daytime mouth guard, you should pay attention to the following factors:

Without any doubt, the a custom dental mouth guard is going to offer the best protection and comfort. It’s made specifically to fit you, and when you order a custom mouth guard, the quality you’re getting is far higher than anything you can buy over the counter.

This leads us to question on mouth guard prices.

When you purchase a custom mouth guard from your dentist, you can expect to pay anywhere from $400 to $800. However, if you don’t want to spend a small fortune on a mouth guard, you can buy one with the same high quality, but directly from the source. Pro Teeth Guard has been working with dentists in the California area for years, and we use the same professional materials and process to create the custom dental mouth guards for our online customers. The only difference between the dentist’s office and us is that you’ll have to make the impressions yourself.

Which type of guard is best for you?

Hear From a Customer 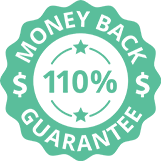 We're committed to your complete comfort and satisfaction. All purchases are covered by our 110% Money Back Guarantee, so you can be confident when you make the purchase. Order Now or find out more about How it Works.