What is Daytime Bruxism or Teeth Grinding? 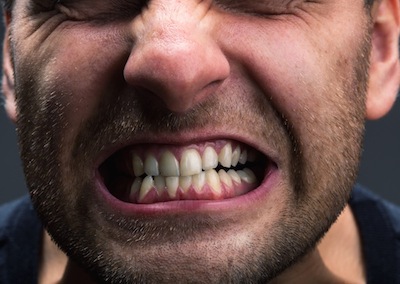 While nighttime bruxism is typically characterized by teeth grinding, bruxism can also occur during the day. Daytime grinding is uncommon in the general population, but daytime clenching–also a form of bruxism–occurs in approximately 10% of the population (Mercut et al., 2013).

Like nocturnal bruxism, daytime bruxism or diurnal bruxism is closely related to stress. Most people have experienced teeth clenching in response to stress at some point, but it is when this clenching becomes chronic and starts to cause damage and pain that it becomes a problem rather than a periodic response to high stress situations.

Diurnal bruxism is unusually common in high stress professions. Though it occurs in only 10% of the population at large (Mercut et al., 2013), an estimated 50% of law enforcement officers (Carvalho et al., 2008) and 59.2% of IT professionals (Rao et al., 2011) suffer from the effects of daytime clenching.

Clenching seems to be a natural human response to stress, but in those who are unusually susceptible to stress or who have highly stressful careers, this natural response can go very bad. Like teeth grinding, teeth clenching can lead to enamel degradation, tension headaches, jaw pain, and even tooth breaking or cracking.

Though both classified as bruxism, nocturnal and diurnal bruxism seem to operate through differing mechanisms (Manfredini & Lobbezoo, 2009). Thus, those who suffer from nighttime grinding are not necessarily more likely to suffer from daytime clenching and vice versa. In fact, while diurnal occurs in 10% of the general population, nocturnal bruxism affects only 5% of the population (Mercut et al., 2013).

The difference in prevalence may in part be an effect of differing levels of awareness. Diurnal bruxism, by definition occurs during waking hours making it much easier to identify and diagnose than nocturnal bruxism which occurs during sleep. Thus, daytime clenching may not actually be more common than nighttime grinding, but is simply easier and more often diagnosed.

In addition to easier diagnosis, daytime bruxism can also be easier to treat as a result of patients’ awareness. Biofeedback, cognitive behavioural therapies, and aversion therapies are all easier and more likely to be successful when the patient is able to take an active role in the treatment through self-awareness.

If you can feel yourself clenching while awake, you can train yourself to stop the action, but if you are clenching and grinding while asleep, it is very difficult to isolate and manage bruxism events.

Though diurnal bruxism may be easier to manage with the help of the patients’ awareness, it can still prove difficult to cure. Unfortunately, standard night mouth guards are not an option for treating daytime clenching. Even custom fitted night guards are typically too bulky to allow clear and easy speech.

There are however, other options to protect your teeth from daytime clenching. Some dental clinics and online retailers offer extra thin acrylic mouth guards that not only allow speech but are so thin and discrete as to be nearly unnoticeable when worn. Without any speech impediment or visual evidence, these ultra fine mouth guards can help protect your enamel and cushion your jaw from the intense force of diurnal bruxism.

Your Options for Treatment

Daytime bruxism is closely related to stress levels and is nearly twice as common as nocturnal bruxism. Self-awareness and aversion or cognitive behavioural therapy can help reduce or eliminate clenching, but in cases where treatment is unsuccessful, other options are available. Daytime mouth guards which are discrete and do not affect speech can help to prevent enamel damage and protect your jaws and teeth.